When Fahim’s parents come for a visit, they sometimes bring things with them, usually food items of one description or another. It might be sweets like muscat or jellabies, or fruit from their trees like mango or papaya. Sometimes, it’s green chillies or other vegetables. This last visit? Awara. 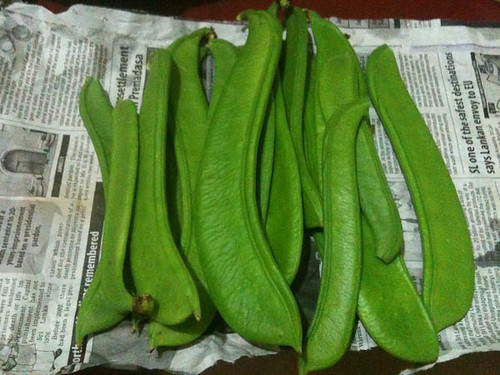 Awara look a bit like snap peas, only bigger, badder, and on way more steroids. But are they a pea or a bean and what the heck are they?

As it turns out, awara (in Sinhalese) is the immature common jack bean (in English).My mother in law confirmed that the leaves and flowers are the same as a picture I found, although the plants she’s seen have darker purple flowers.

At Fahim’s parent’s house in Kurunegala, they have a plot of land behind the house that Fahim’s mom uses as a garden. She has all manner of plants growing in there, including banana plants, papaya plants, a curry leaf tree, and teak trees. Other vegetables come and go as she feels like growing them and the crops get rotated. Along the back fence, a neighbour woman apparently has grown awara, using the fence to support the bean’s vines. The neighbour gave my mother in law permission to pick some of these beans. They are apparently edible when eaten immature, but don’t eat too many as they can be mildly toxic.

I wondered what we would do with this bean thing, and, as it turned out, Fahim’s mom wanted to make it into a mallung. I love mallungs. 😀 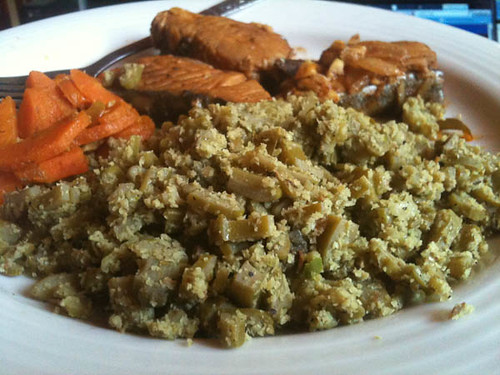 Here, the Awara Mallung is shown along with a carrot curry and Tamarind Fish Curry.

If you don’t have curry leaves, omit. There is no substitute.

Maldive fish flakes are flakes of dried tuna. I’ve heard that dried shrimp can be substituted, but have not tried this myself.

So. The big question. How’d it taste? Not entirely like beans, but pretty close. And it was pretty darn good. 🙂

Have you had jack beans before? If so, how do you prepare them?

This site uses Akismet to reduce spam. Learn how your comment data is processed.

Howdy and welcome to my site! I'm Laurie and I'll be your, er, hostess today. :)

I cook food from all over the world. And I experiment wildly.

Currently, I'm working my way around the world, trying out at least one new-to-me food from every country.